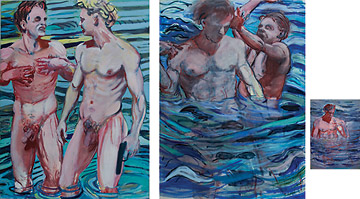 Richard Seehausen was born in Indiana and raised in upstate New York. He received his BFA in Painting from Buffalo State College. He lived in Buffalo for several years, showing at Hallwalls Gallery and the Albright Knox Gallery during the thriving Buffalo art scene of the late 1970s. Seehausen was included in the “Figures, Forms and Expressions” show in Buffalo in 1981 with other artists such as fellow “Buff State” alumni Cindy Sherman and Robert Longo as well as Francesco Clemente, David Salle and Sandro Chia, among others.

Seehausen’s work clearly fits in with the figurative paintings prevalent in the later part of the last century. The British painter Francis Bacon, German Expressionism, pop art, advertising, and the news media have all eclectically influenced Seehausen’s post modernist sensibility.

In 1981 Seehausen received the grand prize award at the Buffalo Evening News “Centennial Exhibition”. Whitney Museum curator Lisa Phillips was the juror. He moved to Brooklyn after receiving a CAPS grant, and found representation through the Monique Knowlton Gallery in Manhattan. In 1985, he was selected for the prestigious “Image Scavengers” exhibition at the Institute of Contemporary Art in Philadelphia. Other artists included Thomas Lawson, Sherrie Levine, Barbara Kruger, Sherman, Longo, Salle and others. He continued showing and selling his work with Knowlton until she closed in the late 1990s.

In 2001 he moved to the lower Catskills with his wife and daughter. Since then, Seehausen has exhibited at the Catskill Art Society in Livingston Manor, NY, the Nutshell Art Gallery in Lake Huntington and at the Delaware Valley Arts Alliance in Narrowsburg, NY, among others (see resume). In 2017, the Burchfield Penney Art Center acquired the painting “American Vacation” for inclusion in their “50 in 50 – Fifty Works for Fifty Years” collection.

Aside from certain social and even political commentary discernible in his work, Seehausen prefers to allow his paintings to speak for themselves, in that visual language beyond words.